How do you know that a llama or an alpaca needs help?

In the majority of the cases that come to the attention of The Llama Sanctuary, the question is easily answered. A llama has been left behind on a property that has been repossessed by the bank or the llama has been set free in the forest. Occasionally, we receive calls about an animal or even a whole herd that is living on a neighboring property and that has been neglected or mistreated. Our primary task is to determine who owns the animals and request a visit.  Usually, people appreciate the opportunity to discuss the matter and it sometimes transpires that the keeper was unaware that they were not providing the level of care necessary to maintain a healthy herd.

Occasionally, neglect of the animal is a consequence of depression or other overwhelming emotional state. No harm has been intended, but the keeper is not aware of the results of their neglect until it is pointed out to them. These people may gladly surrender the llama or alpacas into the care of another such as The Llama Sanctuary.

Sometimes people just aren’t aware that llamas and alpacas need care. There is still a myth floating around that llamas make good pets; they cut the grass and don’t require any kind of maintenance. That is nonsense.  Sometimes, we meet people who have a llama or two, and are literally terrified of them. Being afraid to handle the animals, neglect ensues and as a consequence, the llama’s coat becomes matted and rotten.  If they live on soft ground, then their toenails become painfully long, causing the toes to twist.  Crippled feet caused by long corkscrew toenails is the most common form of neglect that we encounter. 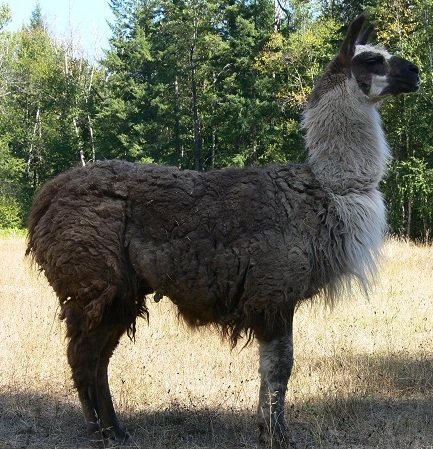 Haven arrived with a severely matted and rotten coat.  The large crumbling and felted matts had to be cut away with hand shears.  Haven is a Classic or ccara llama and should not be sheared down to the skin.  Regular brushing restored his coat to it’s true glory.  WATCH THE VIDEO.

The Grey Divide of Law

The divide between interfering in the rights of another and avoiding the responsibility that rests on each of us to protect animals from neglect and abuse is obscured by a large grey area. That grey area is the where the law resides and at times it can be difficult to determine if the action we ought to take is lawful or is necessarily, the right thing to do.

Find a Llama Sanctuary Near You